It’s Black and White Sunday again, the week has flown by. Paula thinks that landscapes are everyone’s favourite theme, well I’m not sure that I agree, I find them quite difficult, especially in black and white.

My entry this week is an image of Aphrodisias, an ancient Greek city in central Anatolia. 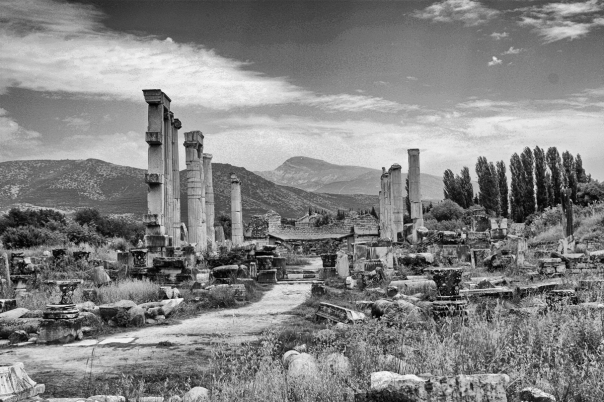 The city was named after the Greek goddess of love in the second century BC, but it’s long been a sacred site. It’s believed that neolithic people worshipped the mother goddess nearly six thousand years earlier. It’s less visited than Ephesus, but is far more interesting, especially with its connection to the sacred feminine.

The Journey of My Left Foot (whilst remembering my son) You should be here

It shouldn’t have happened

I miss you every day

I love you so much

Kindness, spread it along.

When police found Fred Barley, 19, living in a tent on the campus of Gordon State College in Barnesville, Georgia, they were prepared to evict him.

Then they heard his story.

Barley had ridden six hours from Conyers, Georgia, on his little brother’s bike, carrying all his possessions—a duffel bag, a tent, two gallons of water, and a box of cereal—in order to enroll for his second semester at the school as a biology major. He’d arrived early to look for a job, but no luck.

Moved by Barley’s plight, Carreker and his partner put Barley up at a motel on their own dime. Word spread, and soon people donated clothes, school supplies, funds to cover the rest of his motel stay—he was even given a job at a pizzeria.

Then there was Casey Blaney of Barnesville…

Barking In The Dark

Something is terribly wrong when a candidate for President wins the popular vote – but loses the election.

For the fifth time in our history this miscarriage of justice, this slap in the face of we, the people, has occurred. And we, the Democrats, have now won the popular vote and lost the Electoral College in two of the past five elections.

The Electoral College was a fine method for electing a president – in 1790, when life was far more local and information took far more time to travel across a vast continent. That was then, but this is now. This now archaic system distorts the one-person, one-vote principle of democracy because electoral votes are not distributed according to population, thus an individual citizen in Wyoming has more than triple the weight in electoral votes as an individual in California. There is so much wrong with this system and…

This is an excellent blog. Hugs, Barbara

See, here’s the thing…  women will always get abortions.  In a nonsexist society…in a society based on freedom and not on someone’s religious beliefs, a woman would be able to get a safe abortion and that would be it.  But in a patriarchal, religious and woman hating society, a society that wants to control women and punish them for even having sex, then women are left to back alley abortions that lead to physical harm and even death.  No one should be able to tell another person what to do with her, or his, body, especially not religious people who drag their personal beliefs into government in a country founded on a division between church and state.

Women are intelligent beings and know how to live their lives, even when oppressed and hunted, beaten, raped, terrorized, left without protection or money.  One person’s beliefs should never impinge upon the rights of…

Hello my friend. Good post. Though white I am here for you. Hugs and light, Barbara

Smoke
fog, haze, morning mists
mysterious, creating illusions
until the Sun comes out
burns the haze away
revealing the world
in all its splendor.